skip to main | skip to sidebar

This blog has become a small archive of process and projects long past. Posted by Topher MacDonald at 5:00 PM No comments:

It has been far too long since my last blog update, but that doesn't mean I've been idle! So much has happened in the last 6 months - all will be recounted at the end of this post - but I'd like to focus on my most recent project.

Shown below are some works from "Childe Roland to the Dark Tower Came," a series of ink illustrations based on the poem by Robert Browning. The work was made over a grueling 4 month period for display at Hot Pop design boutique and gallery in Milwaukee, WI. There are 23 new works total - here are some of my favorite moments from the project: 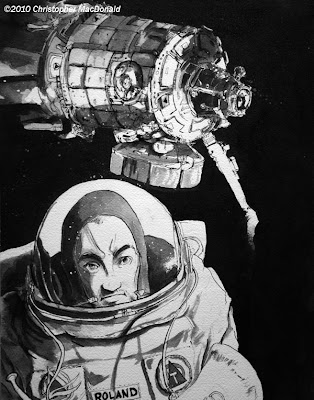 "One More Victim" ink on paper, mounted on board - 11"X 14.5" - 2010
Browning's original poem, published in 1855, is about a young knight on a hopeless quest seeking the "The Dark Tower," from which none before him have ever come back. As he travels through the hellish and barren landscape, Roland knows he has little hope of survival, but presses on nonetheless.

In this interpretation, Roland is depicted as an astronaut floating helplessly through a perilous asteroid field in deep space. I wasn't sure it was a good idea to stray so dramatically from the original setting of the poem, but in the end, I felt the desolate apathy of space emphasized Browning's sense of hopelessness and doom.

There is also an interesting tension that happens when Browning's difficult text is juxtaposed with a more futuristic setting, as per bellow: 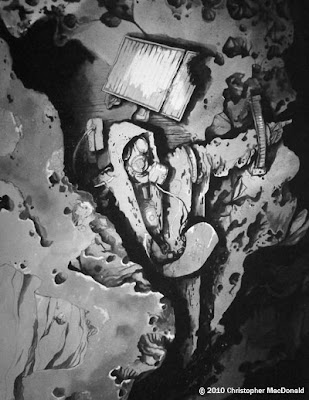 "My first thought was, he lied in every word,
That hoary cripple, with malicious eye
Askance to watch the workings of his lie
On mine, and mouth scarce able to afford
Suppression of the glee, that pursed and scored
Its edge, at one more victim gained thereby." 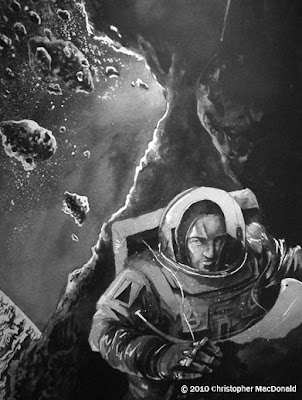 "Thus, I had so long suffered in this quest,
Heard failure prophesied so oft, been writ
So many times among ’The Band’ to wit,
The knights who to the Dark Tower’s search addressed
Their steps - that just to fail as they, seemed best,
And all the doubt was now - should I be fit?"

You can read the full text of the poem here. 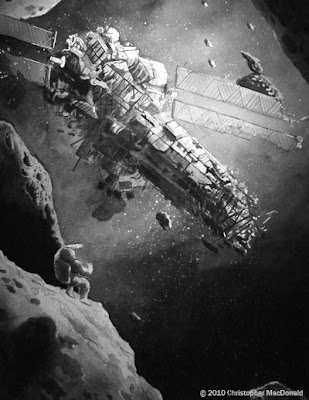 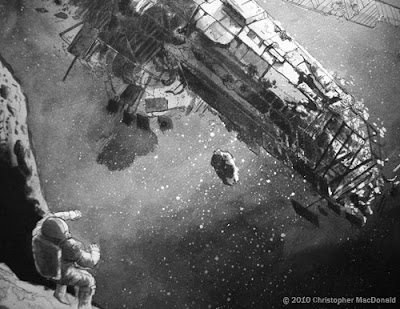 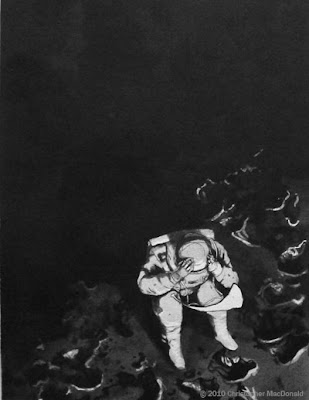 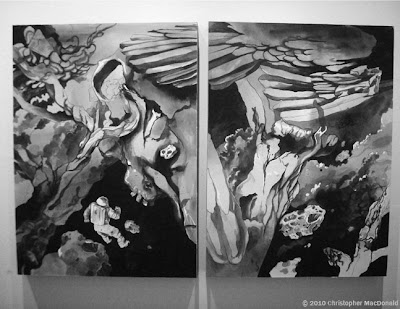 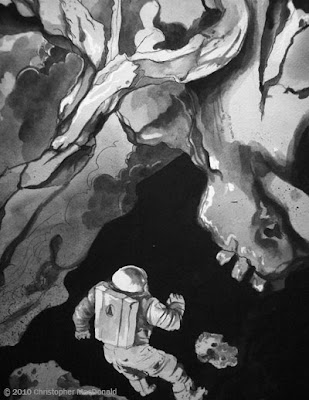 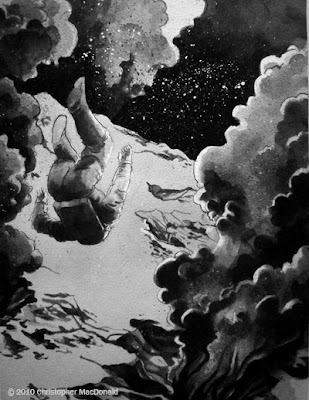 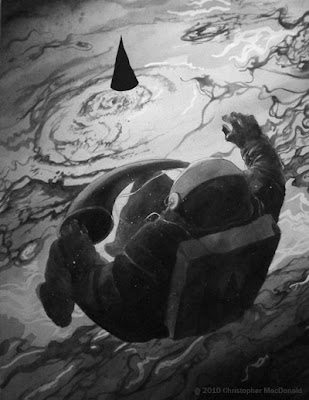 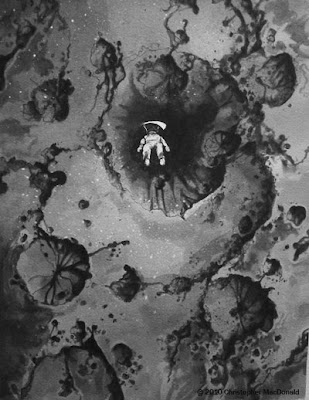 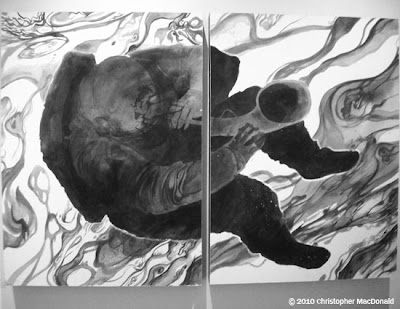 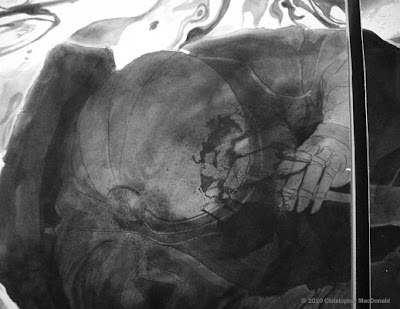 If you are interested in purchasing these original works, check out the Hot Pop Shop website.
Super huge thanks to Ric Stultz for hooking me up with a spot in this gallery (which is now booked until late 2012!). Margaret and the rest of the crew at Hot Pop were awesome to work with as well! Thank youuu!!
Below are some images of the finished installation at Hot Pop. I had a lot of help from Jackie and Brent over at Lovesick Robot with the mounting and hanging of this project! 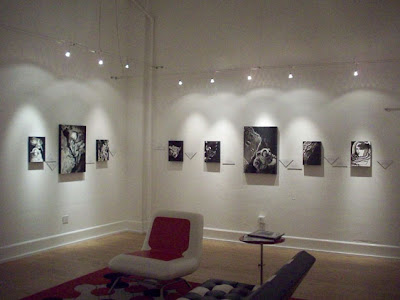 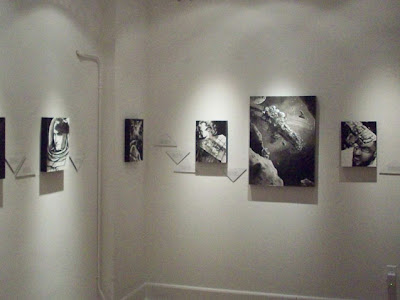 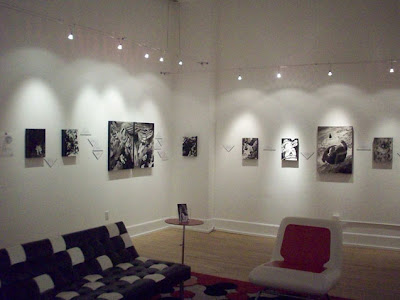 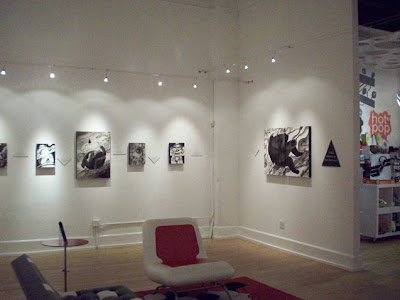 I also created a little brochure explaining the project: 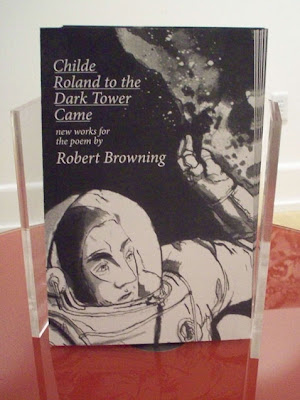 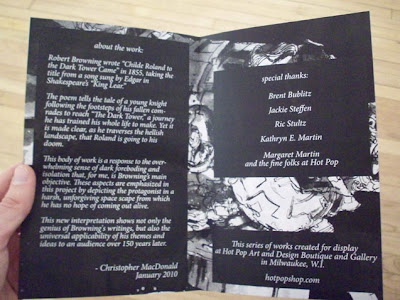 Overall I'm very happy with the work! The installation at Hot Pop will be on view until March 17th 2010, if you're in Milwaukee, WI, check it out and let me know what you think!
I'm currently working on a graphic novel version of this project, and also a serialized web version via Lovesickrobot.org. Keep your eyes peeled!
IN OTHER NEWS:

- Jackie, Brent, Tara and I (together forming the Studio Sunday Megazord) completed our crazy 9-month long project called "The Legend of En" in August 09 at the Borg Ward in Milwaukee. It was out of control, it was! By far one of the coolest collaborative projects i've been a part of.
- You can check see details of the project, along with a little "making of" documentary by Brent, here.
- You can order the Jackie produced epic 80 page graphic novel version of the project here!

- We had little time to rest after the opening of "The Legend of En" - about a month later, we found ourselves in San Fransisco at our very own booth in the Alternative Press Expo! You can see all the awesome swag we had, and even purchase some for yourself, at the Lovesickrobot.org STORE!

- Lovesick Robot Press also now has a podcast! Every week you can hear us argue about the issues YOU CARE ABOUT.

-I've been working as a full time graphic designer for Brew City - an awesome t-shirt company based here in Milwaukee!

-The Milwaukee Artist Resource Network (MARN) has a mentor/mentee program for upcoming artists in the city, and I was lucky enough to be selected as a mentee by the lovely Kathryn Martin. Her work is amazing! Katie and I will be in a group show this Spring at the Milwaukee Institute of Art and Design, along with the rest of this year's MARN crew.

-Working on some new stuff for my website, my blog(s) and some more upcoming shows as well!


Thanks for reading, and stay tuned for more updates!
Posted by Topher MacDonald at 7:58 PM 2 comments: 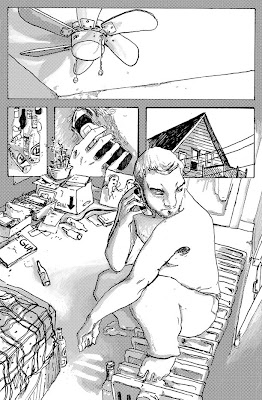 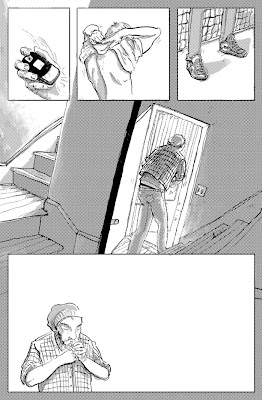 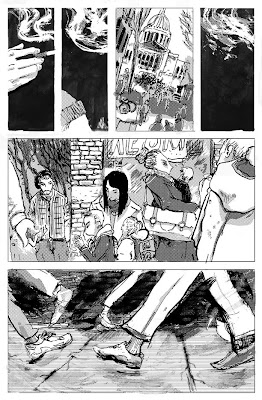 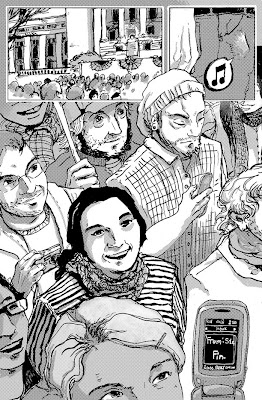 Please visit my portfolio website for more works, projects, and images from my sketchbook!

Other blogs I have: